Appreciative living is an art Filipinos have mastered and kept improving ever since the remote days when heir ancestors were building the rice terraces. Indeed I can sense a strong connection betweeen NLP, or neuro-linguistic programming as a way to connect with the world of our sensations and emotions, and what they call « Kapwa ». This is a story about finding the new Jerusalem in the jungle, and enjoying ll of it tremendously.

The day before I left Manila for the lush slopes of Mount Banahaw, a bitter American handed me a CD with all sorts of recommendations the business community had prepared for the new president of the Philippines. His disappointment was obvious, as he uttered “this is our last attempt to make policy for this country”. Indeed, his intentions were good. Many years ago, even I had shared some of these hopes for a better, more efficient, fairer business environment. But this was no longer the case. No longer did I dream of changing this place and these people against their own will, or lack of it. I was going back to Banahaw to connect with this country on a different, deeper emotional level. If anything was to change, it would have to come from the heart, not from any sort of rational, however thoroughly prepared blueprint. Things would happen at their own pace.

Besides I was there to learn, not to teach. Having just completed my coaching and Neuro-Linguistic Programming studies, I was coming here to close a cycle and “live the experience”, whatever this entailed for me. Last winter, on several occasions during the NLP exercises, I had come back to that place in imagination, building it as an anchor, a source of joy, inspiration and positive energy. Now, I was going back for real, and I was looking forward to trekking in the forest with my friends, enjoying a bit of physical exercise among the unique flora (oh, the rafflesia banahawensis).

On my first trip to the Philippines, in the mid-90ies, my friend Jeannie Javelosa started telling me about the mysteries of Mount Banahaw, a place considered sacred by many Filipinos and spiritual-minded people around the world, including Tibetan and even Catholic monks, who would congregate there to meditate and revel in the place’s psychic energy. She would tell me how the inactive volcano was renowned among those circles for the healing powers of the water streaming down its slopes and the spirits supposedly roaming in its forests. Most amazing was the web of superstitions and legends that surrounded the place like the clouds hiding its summit from the eyes of the trekkers. What made the story even more compelling was the contrast with the nearing Mount Cristobal, a place of dark energies where some people were said to be practicing black magic. Indeed, the Philippines had become a very fashionable place among New Age communities. Pilgrims started coming from all over the country, until the Department of Environment had to close down most of the trails leading to the summit until such time that the place regenerates itself. Today, some of the best pictures of Mount Banahaw and its rare flora can be seen on Youtube.

As for me, always a taker for a good story and a lover of nature, I was mostly excited at the perspective of spending a week-end in the mountain, enjoying the fresh air far from the unbearable pollution of Manila. The first time I finally got there with Jeannie, we met a fantastic story-teller who would rant on and on about the mountain spirits, dwarves, elementals and even UFOs making appearances in this “New Jerusalem”. Never mind the fact that the guy got a bit carried away in his own tales. For me, what made this experience memorable was the deep yet fun conversations with my friends, the walks in the mountain and the practice of yoga on a balcony overlooking the landscape. Jeannie’s house was perched high above the forest, and from there the view was breathtaking. As we went through the various yoga movements, I was enthralled by the smell coming from the flowers of a rare vine, the waves of green foliage filling the whole space all the way to the horizon and the view of the Mount Salakot just on the other side of the slope. Far from being the idyllic quiet spot in the mountains, the place was vibrant with the presence of numerous animals, birds and insects whose voices came together in a noisy background. In the middle of the night, for no apparent reason, and the sunrise being still hours away, roosters – dozens of them – would start crowing, as if sounding the alarm for some mysterious presence, thus waking up all the dogs who would start barking furiously for hours. In the morning, exhausted, I spent an hour looking at a procession of ants going up and down a branch, my eyes moving ever more slowly until I was captivated by a drop of water bending a leaf under its weight. I became aware of all the nuances of green, as I walked down the moss-covered steps carved in the old volcanic reddish stone. The place was eerie. It reminded me of the strange island where Tintin and his companions are taken hostage in the album “Flight 747 for Sydney”. The comparison was not entirely absurd, as I was told the next morning there were some rebels hiding on the other side of the mountain. UFOs, on the other hand, did not manifest themselves.

Back in France, I kept returning to Mount Banahaw in my mind whenever I would look for a peaceful – and powerful – resource-image. During my training in Neuro-Linguistic Programming (NLP), I would meditate in a giant lotus flower shaped after the memory of the vine flowers growing under Jeannie’s balcony, my mind wandering over the mountain’s green crests.

Of course, I was excited to go back there during my latest trip to the Philippines. My coaching teacher, Nicole de Chancey, used to say that no learning process would be complete until we “had it in the muscles”, so it was a wonderful experience to practice yoga in Jeannie’s high-perched house after a particularly long trek to the dark mount Cristobal. My friends compared disciplines, the Asian and the Western approach, meditation, NLP, while sitting on our yoga mats on the balcony. They told me about Kapwa, the sense of the other in the self, which is a mode of perception more than just an concept. True enough, my muscles had stored all these memories, and they all came back. I was now ready to become a teacher and a healer myself. Having given up on the idea to change this country and its people, they opened up to me and started sharing their secrets. Alas, the bitter American would never understand. These were not things you could store on a CR-Rom. 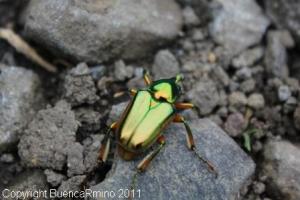 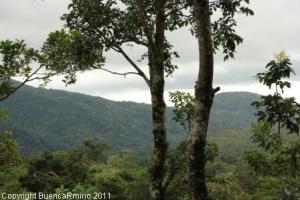 IF YOU WAN TO KNOW MORE ABOUT MOUNT BANAHAW:

Mount Banahaw (alternative spelling: Banahao or Banájao) is one of the active volcanos in the Philippines. Part of a volcanic group, it is located along the boundary of Laguna and Quezon provinces, on the island of Luzon, in the Philippines.
The mountain and its environs are considered sacred by the local residents because of its « holy water », which allegedly have beneficial qualities, issuing forth from local springs and its « puwesto s, or the « holy sites ». These are composed of unique, natural features such as rocks, caves and springs with shrines erected in, on or around them, their location having been revealed to a man in the Spanish Era by the Santas Voces or the « Holy Voices ». It has another of this mountain and it was named as Mount Banahaw de Lucbán.

The term Banahaw is not known to many people but some beliefs attribute it to the description of a holy being. This mountain has a rock with the footprint of an unknown being and supposedly, this was the origin of the name of the mountain. Banahaw is very close to the modern Tagalog words banal (holy, sacred, divine) and daw (a word used in quoting another speaker; when appended to sentences, daw indicates slight disbelief or uncertainty in the veracity of the quotation’s content). Combined, the two words mean « [it is] probably/supposedly sacred ». The way the phrase was transcribed in Baybayin, the ancient syllabary used in writing Tagalog prior to the introduction of the Latin alphabet, finally produced the term  » Banahaw